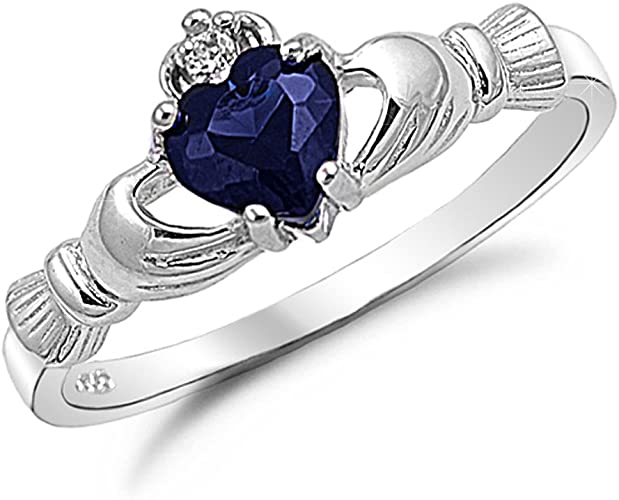 The Claddagh is a legendary jewelry item that epitomizes timeless values. The legacy design cues hands on either side of a heart and a crown on top. The classic Claddagh shows the wearer’s family situation. Thus, a heart looking out the fingertips means you’re single, whereas this element pointing towards the wrist means that the owner is taken.

Today, this ring has a huge number of design variations, but the main three elements have remained intact. This jewelry item is presented to girls and women as a symbol of companionship or as a Celtic engagement ring.

The Story Behind The Claddagh Ring

The Irish Claddagh ring tells a heartwarming romantic story steeped in heritage and life-long affection. This story began a long time ago – three hundred and forty years ago, to be exact.

The protagonist of this most widespread legend is Richard Ioyes. One day, he ventured off to what is now known as the North American islands. On his way back, he was going to walk his sweetheart down the aisle, but on the way to Claddagh, his ship was seized by Algerian pirates.

In those days, pirates tore the blue waters, filling travelers with dread. Many noblemen died in the fight and thousands of merchants lost everything they had earned. Thus, Richard was enslaved and brought to a famous jeweler. He spent in slavery fourteen years. Ioyce mastered the jewelry craft to perfection and became an excellent craftsman under his master’s guidance.

Richard kept on dreaming of meeting his bride. This inspired him to create a ring that portrayed two hands holding the heart under the crown.

Later, the goldsmith was set free. However, a Moorish jeweler liked the capable lad and even offered him to tie the knot with his daughter. But Ioyes refused since a bride was waiting for him in his homeland.

When Richard arrived to the motherland, he gave the ring to his faithful girlfriend, who had been waiting for him all these years. They married and settled down in the village. Richard went on to pursue his favorite and lucrative business – he opened his own jewelry workshop. Since then, these rings have sprouted into the local culture.

Although there are different legends circulating about the origin of this item, the romantic history seems the most plausible. The fact remains that the oldest surviving rings bear his trader’s mark, and that a jeweler named Richard Ioyes actually existed. It is also interesting that this goldsmith’s mark features an anchor, which is a symbol of hope.

Today, this ring has rightfully taken its place among the cherished Irish wedding traditions and customs alongside with locking of the church door, the make-up beds, and others.

Today, the Claddagh ring or cladadgh wedding ring  is the eternal embodiment of affection and wholeness. The charm of this item is that it can be used as both a promise heirloom and a marriage symbol. So whether you are into the traditions or prefer a more modern stance, this lovely heritage can be worn and adored by everyone.